Have you ever longed to swim, hike, camp or hang out naked with men who enjoy the same? Have you enjoyed the feeling that comes from working or playing nude? And have you ever just wanted to drop all the masks and pretensions that are so often required of us?
Community of Men Enjoying Naturism (CMEN) is an international social organization for gay and bisexual men who enjoy nude social and recreational activities. CMEN hosts the West Coast Gathering for naturist men in Southern California, naturist gatherings in Northern California and Tennessee, and other nudist recreation events in the greater Los Angeles area and Arizona throughout the year.

As naturists we enjoy being nude, preferably outdoors, for social and recreational activities. We enjoy the freedom of being without clothes whenever possible and practical.

Naturism is a way of life in harmony with nature characterized by the practice of nudity, with the intention of encouraging body acceptance, self-respect, respect for others and respect for the environment. Social nudity is an expression of naturism, exploiting the beneficial effects of the sun, the air and water.

We take the nude human body for what it is: a gift of nature, dignified and worthy of respect. No body parts are shameful; none need take on more significance than others. Naturists think that all natural bodies are whole and complete, no matter what shape they take, or what scars they bear. Being naked makes one more open and honest about himself, and more accepting of others. If clothes make the man, then nudity makes everyone more equal.

Come join the growing number of gay men that have discovered male bonding au naturel! Gay men everywhere are discovering the enjoyment of gathering together with other men for nude camaraderie and the freedom to be found in non-judgmental body acceptance.

CMEN was formed in 1995 with the following goals:

CMEN events are private events for CMEN members in good standing. Guys must join CMEN to attend gatherings and local events. Membership and attendance at CMEN activities and events is limited to men at least 21 years old.

CMEN membership is open to all gay, bisexual, and gay-sensitive men without regard to race, color, religion, national origin, physical appearance, or HIV status.

CMEN’s West Coast Gathering for naturist men is the largest naturist event for gay and bisexual men on the West Coast. This ten day event has taken place in the Malibu hills each September, and features outdoor recreation, social activities, seminars, workshops and evening entertainment. Activities allow men to have fun together, share their interests, and develop new friendships.

First held in October 1999, the West Coast Gathering has grown to draw 450 to 500 male naturists each year from throughout North America, the Pacific Islands and Europe.

West Coast Gathering 2019 moved to a new location at a conference facility in the scenic San Bernardino Mountains, following the November 2018 fire which devastated 96,949 acres in the Malibu area including the conference center we had called our home for 20 years.

CMEN Los Angeles holds a variety of all nude events, including pool parties, cocktail parties, potlucks and massage parties throughout the year in the greater Los Angeles and Palm Springs areas. Most parties are held at private homes, and may range in size from 25 to over 150 members.

CMEN Massage Connection is for men interested in giving and receiving massages with other men in the Los Angeles area. All participants practice giving massage as well as receiving a massage.

CMEN, CMEN Los Angeles, and CMEN Arizona, as GNI affiliated clubs, acknowledge that sex is natural, but sex is not equated with naturism. GNI affiliated clubs respect all of their members for their individuality, whether or not they choose to express their sexuality, and shall endeavor to respect individual sensibilities as may be appropriate, and encourage their members to do the same. In addition, all sexually active individuals are encouraged to practice safe sex. 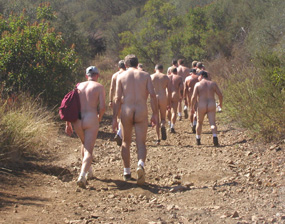 For information about this web site email: webmaster@cmen.org.

Gay Naturists International (GNI) – Promotes gay naturism, lists local organizations, sponsors an international gathering on the East Coast each year, and is a liaison with The Naturist Society. GNI and its affiliated clubs now have over 6,000 members in 12 countries who enjoy nude recreational and social activities.