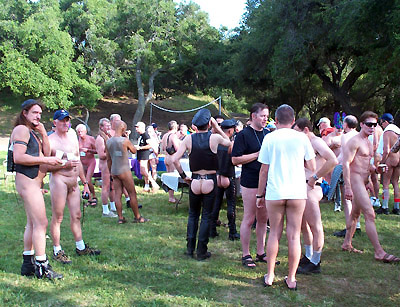 The leather community is a loosely knit community composed of individuals, partners and groups who typically like to wear leather accessories and garments, most often like those of the post-WWII biker culture.

The common foundation the leather community or leather culture is built upon are the principals of trust, honor and respect.

The image of the leather-clad biker evolved from the biker groups that formed following the end of World War II in 1945. For some returning veterans, post World War II motorcycling offered camaraderie, adventure, excitement and occasional danger as a substitute for wartime experience. Men joining motorcycle clubs formed brotherhood bonds which came from a tradition long established in military values and the warriors before them, although these early motorcycle clubs were not gay. Leather apparel was an important part of World War II motorcycle use which carried on to post-war culture.

Motorcycle events also provided a way for interested gay men to meet each other at a time when being gay was still considered a crime in most countries, punishable by years in prison or even execution. The gay male leather subculture began to emerge in the late 1940’s out out the post-WWII biker culture and provided a masculine alternative to the cultural stereotype effeminate image of gay men that had existed prior to the war. 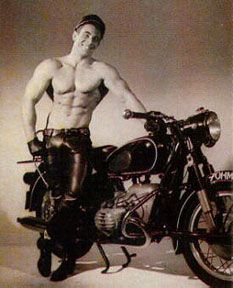 The 1953 outlaw biker film The Wild One, starring Marlon Brando, played on pop-cultural fascination with the July 1947 Hollister “riot” and promoted an image of free-spirited, motorcycle riding, masculine independence. This rebellious image appealed to many men during the confining mainstream culture of the 1950’s, including some gay men who found wearing black leather jackets, a black leather cap, black leather boots and jeans an appealing alternative to the pervasive effeminate stereotype of gay men.  If they could afford it they also took to riding motorcycles.

Photographs of men in leather published by English photographer Tom Nicoll and drawings of gay biker leathermen published by Finish artist Tom of Finland, beginning in the mid-1950’s, helped to further define the emerging image of gay leathermen. Physique Pictorial, a body building magazine published in Los Angeles included many of Tom of Finland’s drawings.

Gay bars catering to the leather/biker clientele emerged in the 1950’s and 1960’s and became the easiest places for leathermen to meet and find camaraderie. Los Angeles and New York are reported to have had gay the first gay leather/biker bars by the mid-1950’s.

As the leather subculture began to foster the development of loosely knit local leather communities, the leather bars became unofficial “community centers” offering leathermen a place to gather, connect with each other, share information and raise funds for various causes.

Gay motorcyclists got to know each other and rode together on weekends. The Satyrs, founded in Los Angeles in 1954, is considered the first documented gay motorcycle club. The Satyrs began as a group of seven gay men who were active in the L.A. motorcycle culture. The Satyrs organized outings known as runs or rides to secluded campgrounds for camping trips, also providing a space where men could explore activities illicit in the 1950’s. The Satyrs held their first Badger Flats Run in 1962.

Because of potential police raids, early gay motorcycle groups, like other gay groups, were typically secretive as openness could result in members loss of jobs and criminal prosecution. 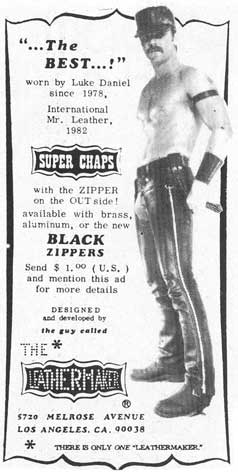 While leather motorcycle boots and jackets could be obtained from motorcycle shops, other leather gear was homemade during the early years.  As gay leather interest grew, leather specialty shops began to create and sell leather fetish gear for a more specific kinky nature. One of the first was The Leathermaker which was opened by D. Lyn Sterling on Melrose in Los Angeles in 1960.

During the 1950’s through the mid-1970’s gay leather bars, like other gay bars and popular gay hangouts, were subject to sudden raids by the police to satisfy political interests, depending on state laws. By the mid 1960’s some patrons and bar owners began to challenge these raids:

In 1973 the American Psychiatric Association issued a resolution stating that homosexuality was not a mental illness or sickness. The statement continued to say the APA supports “civil rights legislation at local, state, and Federal levels that would insure homosexual citizens the same protections now guaranteed to others.”

In 1975 a consenting adults law for residents over 18 years old repealed existing laws on sodomy in California. A handful of other states had also repealed sodomy laws. By 2002, 36 states had repealed their sodomy laws or their courts had overturned them. On June 26, 2003, the U.S. Supreme Court in Lawrence v. Texas struck down the Texas same-sex sodomy law, ruling that this private sexual conduct is protected by the liberty rights implicit in the United States Constitution.

The AIDS epidemic in the early 1980’s devastated the gay population in general, including leather men and women. Out of the devastation, however, a more cohesive leather community including leathermen and leatherwomen emerged. The growing leather community raised money to help fight AIDS and benefit local charities.  The early 1980’s also saw increased attention on safer sex and BDSM activities. To emphasize the concept of safe, voluntary, and consensual activities, the idea of SSC or “Safe, Sane and Consensual” emerged. The actual term SSC is attributed to slave David Stein and first appeared in the statement of purpose of the GMSMA (Gay Male S/M Activists) in 1983. 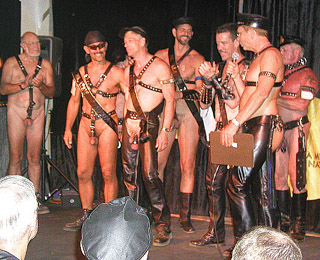 Throughout the history of the leather culture a variety of traditions have been observed.

Trust, Honor and Respect: The common foundation the leather culture is built upon are the principals of trust, honor and respect. More than mere words, these values are basic to society, not just leather folk. Leather folk believe that if we follow these principles in our daily lives, we become role models for our families, both conventional and leather.

From the 1950’s through the 1970’s what is now often referred to as the old guard developed and defined the predominant leather culture. Many gay veterans returning after World War II wanted to retain many of the positive elements of their military experience and the same time hang out socially with other masculine men, they found this among other motorcycle riders. Riding together they embraced a lifestyle of camaraderie, adventure, rights and rituals mostly based on military protocols and rituals, with some variations by region.

Old guard practices emphasized brotherhood, loyalty, discipline, honor, and respect, and are said to have promoted a stricter lifestyle, education, and intra-community privilege based on successive ranks or levels. As with the military these early leathermen had been accustomed to, rules governed what guys wore and what they could do. The old guard code emphasized strict formality and typically fixed dominant or submissive roles, men typically started at the bottom and worked their way up. Leather boots, blue jeans and a wide leather belt were all a new man would start out with, additional leathers were typically earned as a rite of passage. On the down side, outsiders who didn’t have an interest in riding motorcycles generally weren’t trusted and found it difficult to enter the scene.

By the late 1970’s there was a gradual rebellion against the old guard rigidity.   While dedication to core values remained, the new guard or new leather culture that emerged included a new emphasis on choices, or identity: a person might identify as a submissive or a dominant instead of being required to start from the bottom and work up.  Switching and a greater variety of approaches to eroticism became popular.

New leather bars emerged offering more variety where it was easier for gay men to meet each other.  New clubs formed ranging from traditional bike clubs to special interest clubs. New types of more inclusive events emerged.  Drummer Magazine began publication in 1975 helping bridge the way between the old guard and a new broader way of thinking. The Leather Journal began publication in 1987, communicating news about clubs, events, and community festivals and organizations.

On May 28, 1989, at the International Mister Leather contest in Chicago, Tony DeBlase presented his design for a Leather Pride Flag. In an editorial in Drummer magazine, DeBlase explained that “The flag is composed of nine horizontal stripes of equal width. From the top and from the bottom, the stripes alternate black and royal blue. The central stripe is white. In the upper left quadrant of the flag is a large red heart. I will leave it to the viewer to interpret the colors and symbols.”

Although the creator of the flag did not attribute any colors to the flag, in succeeding years others have commonly described the colors as: black is for leather and for permanence; blue is for devotion, loyalty, and community; white is for purity and innocence; and the red heart is for the love of leathermen for each other and for their community.

International Mr. Leather (IML) was established in 1979 by Chuck Renslow, owner of the Gold Coast in Chicago, and his partner Dom Orejudos. The IML contest grew out of the Mr. Gold Coast contest. Held each May, the conference now spans several days, and includes the IML competition, speakers, socials, themed dance parties and a leather market. To compete, IML contestants must either be the winner of a bar, local or regional leather contest or be sponsored by a leather bar, business, club, or organization.

Berlin’s Easter in Berlin Leather Festival, Europe’s biggest gay leather and fetish event which takes place every year at Easter, was first held in 1975. Folsom Europe street fair is held each September in Berlin. Amsterdam Leather Pride is held each October, first held in 1996. London’s Fetish Week each July, which began in 2010, includes men who enjoy leather, uniforms, rubber, sports and other fetishes.

The Leather Archives & Museum opened in Chicago in 1996, and moved to its permanent 10,000-square-foot, two-story home in 1999. The Museum preserves material from various leather communities, houses exhibits relating to leather community history and sends traveling exhibits around the country.