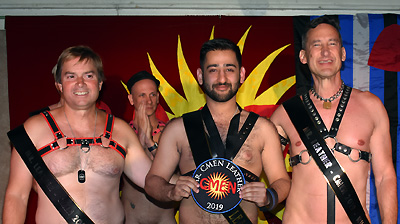 Faisal is looking forward to representing CMEN at Southern California leather community events and at the International Mr. Leather contest in Chicago in May 2020.

As in past years, the West Coast Gathering Leather Day also featured social activities, leather demonstrations, workshops and a dungeon for all those men attending the gathering who are interested in or curious about the gay leather community and leather culture. 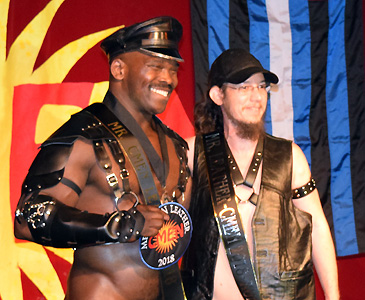 The social hour embraced leather with the theme “Leather and Fetish Fantasies.” As in past years, a high percentage of the men attending the gathering dressed in leather accessories. The late night victory dance embraced a black party theme.

James was born and raised in Oklahoma. James has been comfortable in his own skin socially since his college years and has embraced the acceptance and inclusiveness that both naturists and bears have shown him. He enjoys participating in leather community activities and is looking forward to representing CMEN at Southern California leather community events and at the International Mr. Leather contest in May 2019. 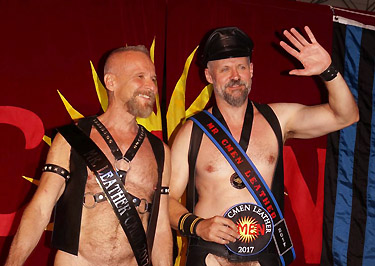 Mark S. from Los Angeles, California won the title of Mr. CMEN Leather 2017 at CMEN’s West Coast Gathering on Friday evening, September 8, 2017. Cesare S. from Fort Lauderdale, Florida was runner- up. The contest was the culmination of Leather Day at the West Coast Gathering, a day celebrating the bond between naturist men who also participate in the leather community.

Born and raised in the foothills of the Smoky Mountains of East Tennessee, Mark came to California in the 1990’s for post-graduate training in child and adolescent psychiatry. A lover of nature, Mark found the National Parks and Forests of Southern California to be a great place for long walks and getting naked under the sun.

Mark also became involved in charity events including AIDS Lifecycle and has done three consecutive, 545 miles charity bicycle rides from San Francisco to Los Angeles raising, with the help of his partner, about $45,000 for HIV prevention and cure.  As a member of CMEN for several years Mark is looking forward to representing CMEN at local leather community events and plans to compete in the International Mr. Leather contest in May 2017.

Mark’s title goal is to recruit more young people into the naturist and leather communities. 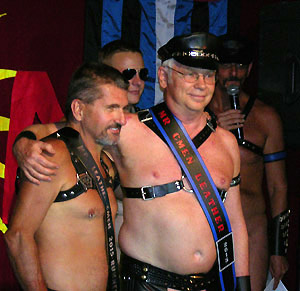 During the on stage portion of the contest, contestants dressed to look their best in leather accessories. Contestants were asked to explain or interpret fundamental leather community concepts, such as “safe, sane and consensual activity;” or “trust, honor and respect.”

They were also asked how they would promote a stronger relationship between CMEN and the leather community.

Held in Chicago each May, the International Mr. Leather Contest has grown to be an annual tradition for thousands in the leather community – drawing contestants and attendees from around the globe.

CMEN has been holding a Mr. CMEN Leather contest at the West Coast Gathering each September since 2000. The contest became an International Mr. Leather Pre-IML event in 2003. Past Mr. CMEN Leather winners are: 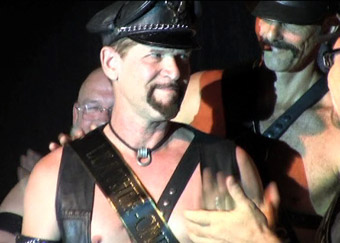 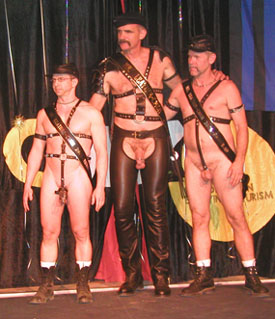 The gay leather community is a loosely knit community composed of individuals, partners and groups who typically like to wear leather accessories and garments, most often like those of the post-WWII biker culture. Many also share an interest in a common group of fetishes. The common foundation the leather community or leather culture is built upon are the principals of trust, honor and respect.